I’m located in northeastern Ohio; Stark County is just south of Akron and is largely suburban, being situated between two medium sized (for Ohio) cities – Akron and Canton. This used to be an area absolutely loaded up with steel and other manufacturing. That legacy is mostly gone, with major employers like Hoover and US Steel, among others, having since relocated and/or reorganized their businesses. However, there are a fair number of corporate headquarters in the area that have bolstered the area’s employment; some of these include Goodyear, Bridgestone, Diebold (yes, the one of 2000 election infamy), the Timken Company, and JM Smucker Foods.

My wife, mother, and several close friends work in a total of 3 local districts across ages and subjects taught. Here in Stark County the norm across most districts was to offer a hybrid model. To my awareness, all the county’s districts (~15 of them in total) here have offered in-person instruction 5 days a week throughout the year. The biggest variance has been with regards to flexibility of changing which option a student uses. One district offers the ability to go from in-person to online learning as often as daily. Others required an election by 9 week period, or by semester. Some have dedicated staff for online learning, and others require teachers to essentially manage two classrooms (one in-person and one virtual) simultaneously.

To my awareness no schools in the area have traced significant in-school transmission; the anecdotes I hear about case reports have trended with community rates (in fact, at least several times reported case rates for students not using in-person instruction have exceeded those for in-person learners). Almost all the schools in the area went fully virtual for some or all of the time between Thanksgiving and Christmas as local and statewide case counts spiked. The general trend seems to be about 30% of local students have opted into online learning; this rate seems to be slightly higher in middle and high schools which I’ve had explained as parents either perceiving higher risk or lower benefit of sending kids in-person. Masking, social distancing, and intense cleaning have been expected and enforced since day 1. I expect the online options to persist into next year; more than one of my teacher acquaintances suspects that at least some districts will maintain the option indefinitely now that parents have come to expect it, particularly in the wealthier districts.

What we’ve seen in this area is radically different from larger cities. My understanding is that many inner-city schools including those as close as Akron did not offer any in-person instruction for approximately a year. Governor DeWine forced schools to agree to return to at least some in-person instruction before prioritizing teachers for vaccination, and seems to be enforcing that.

My own congregation of about 70 people met 100% virtually from roughly March through August, then began masked/distanced services which lasted through November, went 100% virtual again for a month or two, and has since returned to masked services. Others in the area have varied; some have not met in person for a year now, and others only ceased briefly. I would say that the most common option has been meeting in person, but with strict masking/distancing and encouraging older members to stream from home. Masking appears to be at least modestly divisive; at least a few congregations have gone mask-free or offered mask-optional services. Consequently, at least a few individuals have either temporarily or permanently changed churches in order to be under a masking policy they find more suitable. I think that most churches have felt pressure and felt like they’re struggling with attenuated connections within their members and a very real tension between a desire to do personal work and the realities of pandemic life.

I’ve seen perhaps 3-4 movies in theaters since this began and had great experiences. Our local Cinemark theaters reopened partway through the summer and have stayed open. The Regal theater briefly reopened and closed within a month or two (this was a Regal nationwide decision). I’m not certain what the smaller, local theaters have done. The theaters that stayed open have been pushing their sanitation practices in marketing materials and offering “private watch parties” for ~$100 and up to 10-20 people of your choosing. The booking system automatically blocks 2 seats on either side of your group (so if you go with one friend, the two of you take up 6 seats; the two you occupy plus the 4 spacers). The rows are more than 6 feet apart, so the distancing is actually pretty good. I’d say the average occupancy on the nights I’ve gone has been no more than 10-25 people in a theater that might seat 150, and masking has been pretty well observed despite the obvious loophole of eating popcorn slowly through the movie to avoid having to do so. Masking is enforced at the door, but no ushers are roaming the aisles checking compliance

Restaurants have basically all created carry-out, outdoor dining, and curbside pickup practices. Indoor dining is permitted at limited capacity, but when I’ve been to restaurants to pick up an order the number of people in them hasn’t typically been enough to even tempt the restaurants to go over the limits. Lots of COVID theater with oddly placed plastic dividers that don’t have a chance of blocking aerosols, but I haven’t seen any that have flagrantly ignored guidelines. For my family, we have a baby in the house (born Feb ‘20) so takeout options have been a welcome way to still enjoy restaurants we otherwise couldn’t have patronized without the pandemic forcing changes.

Generally I think compliance in this area has generally tracked with severity. Mask compliance was slow to build, but by about May was up to ~90% and went up higher yet as the late fall surge occurred. I’ve not seen any “Karens” engaging with non-maskers even in grocery stores; people typically give them an especially wide berth though. I see lots of people wearing masks improperly (noses out on probably 10% of people), but again no confrontations or even dirty looks I’ve caught. I’d guess that 10% or less wear masks outside, even at places like gas pumps.

Some places – especially medical facilities – still do temperature checks at the door, as do some employers. WFH has been common, but not universal. I’ve come into the office mostly as normal since transportation cleared the “essential services” hurdle easily; my employer created a “socially distanced” office via a combination of WFH and furloughs/layoffs where no one has to sit too close to other people. I think we’re probably among the more aggressive companies in the level of perceived risk, but it doesn’t seem to have created undue issues either in terms of morale or COVID cases. I think most in the area have returned to at least some in-person work by this point even if they were more aggressive in WFH earlier.

My anecdotal experience has been that people have picked a comfort level in terms of their behavior and more or less stayed with it, with most temporarily adjusting to be more cautious during major surges such as in late 2020. I hear relatively few stories of people who’ve opted into full lockdown like I read about in the news; most everyone has taken the edge off their in-home social visits (but often not stopped entirely). Relatively few people seem to have stopped all visitation with local family, but out-of-town travel has definitely diminished. Even among people who haven’t just started disregarding COVID, there are lots of casual – and surely epidemiologically suboptimal – “pods” where what people actually mean is “these people are too important for me to cut out of my life over this disease, so I’m calling them part of my ‘pod’ to put a gloss of social acceptability on seeing them even if there are 3-4 families in my ‘pod.’”

DeWine earned plenty of praise particularly early on, but anecdotally I think he’s lost a lot of people’s confidence as he’s shown more and more caution and equivocation with time. He clearly believes that policy choices make a difference on the ground and has held to policies that have undermined his credibility. The most famous example of this is a curfew policy that stood at 10PM and was tied to hospitalization rate as a metric of letting it be taken away – moving to 11PM, then midnight, then going away. It was so transparently technocratic and silly that it made a lot of people do a double take. The joke among people of all political stripes that I heard was “apparently the virus only comes out at night!” DeWine spoke about that policy in grave tones like it was a huge factor in saving lives even as plenty of people were (rightly) mocking the absurdity of it. I think that little things like that have done as much or more damage to public confidence than the big-ticket things like mask mandates. All of Ohio’s restrictions are now merely advisory (no force of law), which doesn’t seem to have changed anything perception-wise.

There were several performative attempts to curtail the governor’s powers or even impeach (none came close to succeeding) but he’s a Republican who wouldn’t have a future in Ohio politics if he weren’t already in his seventies and likely done running for office.

Ohio’s communication early was good, with daily press briefings and expanding data offerings and a particular focus on the state’s chief health official, Amy Acton, who became a relatively well-liked figure for quite a while (to the point she’s been floated as a possible Democratic candidate for Rob Portman’s soon-to-be-open Senate seat).

People’s patience with the state has varied, but generally has flagged post-Christmas. The state has earned a lot of that. Vaccine distribution being perceived as slow and infinitely confusing (there wasn’t a centralized signup until this past Monday 3/8) was part of that. The curfew and other overly technocratic micromanagements were another reason.

I think Ohio’s county-by-county color coding map has been a disaster and another high-profile driver of a loss of confidence. It seemed to do well early and is generally followed pretty closely even by “normal” people. However, it’s been basically unchanged since late December even after every single week has brought good news. It still drives what some regulated businesses do (like how the nursing home my grandfather is in lets us visit – or mostly not- if the county is in the “red” bucket). It’s too complicated – 7 metrics driving a simple 4-color system – and clearly not responsive to material improvements. I do data visualization some in my job, and I’d have resigned if I designed something that failed as badly as that map has lately.

Here’s the map at 12/31/2020 and as of 2/25/2021 side by side. You’ve seen Ohio statewide data to know how dramatically the situation changed between them. Indefensible.. 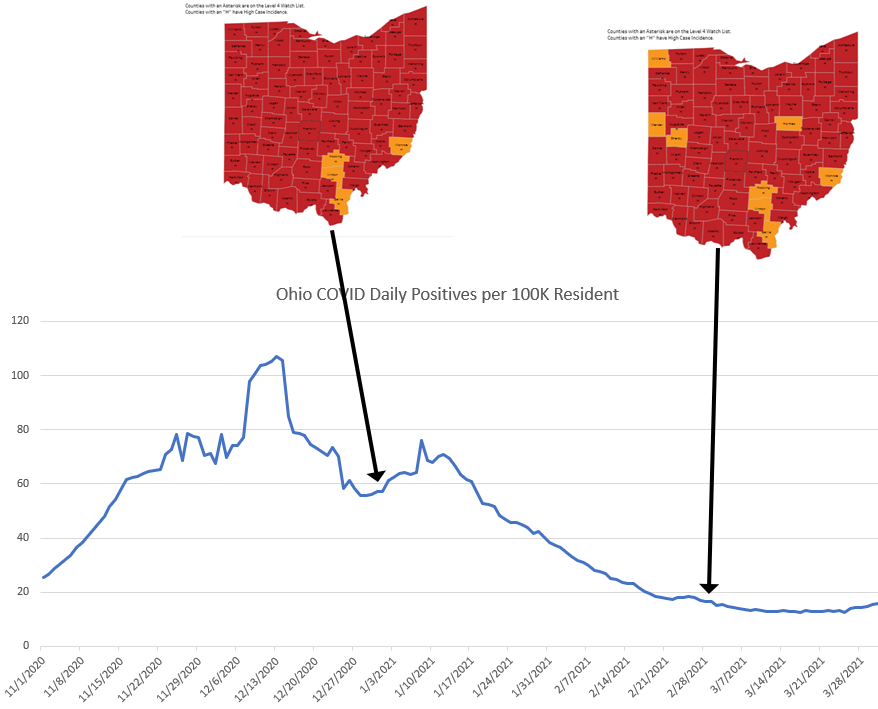